{I've linked this post up to the Poppies at Play Christmas Crafts Contest. Go checkout the other fun entries...after you read this one of course!}
Okay, as promised a two-for-one special! So fitting for this weekend don't you think?
{Sorry there aren't more pictures, I was busy being so happy with how these came out on the first try that I didn't take any! So please, comment if you need clarification of anything.}
First up, this super cutie... 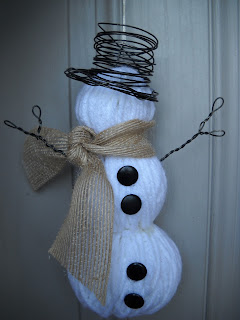 I love it when it comes out better than you hoped for!!! I am in LOVE with his hat,it makes me giggle with happiness. A crazy emotion for some wire but I really like it!
This first came about from a Jo-Anns ad. Tucked up on a branch in a picture selling something else was a little snowman head made from a ball of yarn-wanted to try it.
Then while blog surfing Thanksgiving night I came across this wonderful series of posts at
Under The Table and Dreaming
One of her guest bloggers had done an entire snowman made from styrofoam balls wrapped in yarn. So thee it was, that's what I wanted to try.
Mine is a bit different, I omitted the styrofoam and just made 3 balls of yarn
{about a 4", 3", and 2" diameter}.
Hot glued them all together so they made a snowman body.
I used black furniture tacks for the buttons-just glued in as well, and burlap ribbon that I found at Wal-mart
for the scarf.
Then I twisted some black 20 gauge wire together to make the arms.
I made one arm then threaded the wire through the body and shaped the other. Just bend, pinch, and twist. A little glue at the base to keep it from  twisting.
And then that awesome hat!
I found two of my kids blocks that I liked the size of. I wrapped the wire several times around the larger block and then switched blocks and continued wrapping up the smaller one.
I found the end of the wire on the big loops and twisted it around the big loops only to keep them together.
Next I took the pile of smaller loops and pushed them back  through the big loops so they were now on the opposite side of where they started, this helped to sturdy them up a bit.
Then I took a separate piece of wire about 4 inches long and pinched it in half. Slid it over the smaller loops with the pinch at the top of the hat. I pulled it down on the loops until I got the height I wanted on my hat and then gave it a twist to hold them there.
I snipped off one tail and slid the other down into the snowman's head. Tacked it in place with a little glue and tied on a thread hanger.
I really am in LOVE with this snowman! Gonna be hard to give him up...
So I moved on to today's ornament to help with the separation.
Take one old flood light add some felt, feathers, and spray paint and get this... 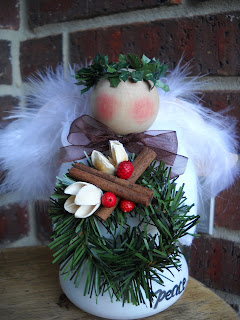 Again, better than I hoped. This went together faster than it might look, and all done with glue!
First I spray painted the bulb all white.
Second glued on a 2" wooden doll head to the screw in end of the bulb.
You can't really see this but she does have arms! I cut a white felt square in half ending with a piece 4.5x12 inches long. I folded the long ends in on themselves and glued them together making a long tube.
I then glued the center of the tube to the back of the bulb. Under the head, on the metal threading of the bulb.
I added a little bit of poly-fill and then cut the tube to the length I liked for the arms. Glued the ends of the tube closed and then glued the arms down onto the bulb.
I cut a bumpy circle out of the felt, snipped out a circle in the center of that, and then placed it around the "neck" for a dress collar.
Next I cut a piece of embroidery thread and wrapped it from front to back, under the head, tied it in a knot and then tied another knot about 3 inches up to make a hanger. Glued on a ribbon to cover that up.
I decorated my little wreath next, and then glued it on.
Made the halo out of holly ribbon and glued that on, and then inked the cheeks.
I cut out a pair of wings from cardstock and glued on white feathers, then glued them onto the back of the bulb. Last, I painted on the word "Peace" to the bottom side.
And done! 2 ornaments in about 2 hours...
not a bad days work!
Happy Crafting!

WOW! These are incredible!!

I just realized I have everything to make that adorable snowman. I'm going to give it a try this afternoon, hope I can get the hat to look as cute as yours.

I'm doing my 1st Linky party & its all about Snowman!! I would love for you to join ;)
www.itsallinmyheadstefsblog.blogspot.com

I'm so there! Thanks for the invite-

I love both of them! So great!!

I love the snowman!! Where do you have it hanging? I think it would be excellent as a door hanger... any thoughts, ideas or suggestions? :)

Do you have pictures that "show" the steps?? I am (like many crafters) such a visual person. Very cute idea. Wondering if I can use a fake pear instead of a bulb, not as breakable...